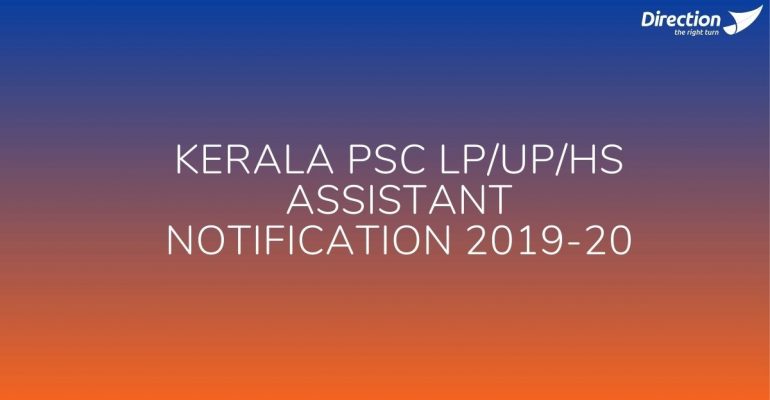 Kerala Public Service Commission (KPSC) has released the examination dates for LP/UP Assistant Examination. The exams will be held in November 2020. The KPSC has announced 6 official vacancies in the education department for the positions of LP/UP Assistants. And, there are a total of 24 vacancies, including all subjects.

Candidates must submit their written exam confirmation through a one-time registration portal between 23rd August 2020 and 11th September 2020.

Passing the Kerala Teacher Eligibility Test (K-TET) conducted by the Government of Kerala for all the positions is mandatory.

Candidates who have passed CTET/NET/SET/M.Phil/Ph.D./M.Ed. in the specific topics are excluded from taking TET. The B.Ed should be in the concerned language.

A degree in Arabic or Arabic as one of the optional subjects in pattern II of Part III and a B.Ed/B.T/L.T degree recognised by Kerala universities. Postgraduates with a B.Ed/B.T./L.T. in Arabic are also qualified to apply.

A passing grade in the SSLC exam conducted by the Kerala Commissioner for Government Examinations or its equivalent.

A pass in the Kerala Commissioner for Government Examinations’ TTC (Kannada) Examination.

A pass in SSLC examination conducted by the Commissioner for Government exams, Kerala or its equivalent.

A pass in a pre-degree examination conducted by either of Kerala universities or any examination recognised equally.

A pass in TTC examination conducted by the Commissioner for Government Examinations, Kerala.

A Bachelor’s degree in any subject and a B.Ed/B.T/L.T degree from any Kerala university.

A degree and B.Ed/BT in the concerned subject recognised by Kerala universities.

Bachelor’s degree in mathematics or statistics as a main subject and B.Ed/B.T. in the related subjects, recognised by Kerala universities.

Before applying for the position, candidates must register under the One Time Registration on the Kerala Public Service Commission’s official website. Many who have previously registered can use their Username and Password to apply.

We hope that you were benefited from this blog. Direction wishes you all the best for your upcoming LP/UP Assistant Exam.