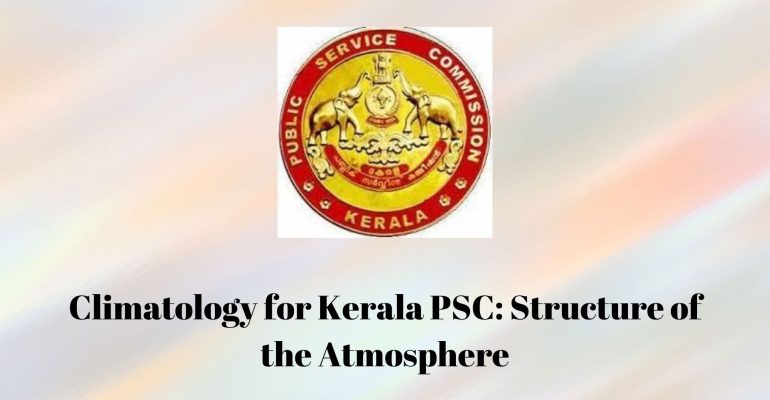 The structure of the atmosphere is highly complex. The atmosphere consists of different layers with varying densities and temperatures.

●  The temperature changes irregularly with height. Density is highest near the surface of the earth and decreases with increasing altitude.

●  The column of the atmosphere is divided into five different layers depending upon the temperature condition. They are:

●  The troposphere is the lowermost layer of the atmosphere which immediately overlies the earth’s Surface.

●  The air we breathe exists here.

●  This layer contains dust particles and water vapour. Almost all the weather phenomena like rainfall, fog and hailstorm occur in this layer.

●  The troposphere is the important layer since it is the locale of all the vital atmospheric processes which create the climatic and weather conditions on the earth’s surface.

●  The troposphere is the densest part of the atmosphere.

●  Its average height is 13 km and extends roughly to a height of 8 km near the poles and about 18 km at the equator.

●  The thickness of the troposphere is greatest at the equator because heat is transported to great heights by strong convection currents.

●  The troposphere at any latitude is thicker in summer than in winter.

●  The temperature in this layer decreases at the rate of 1°C for every 165m of height. This is called Normal Lapse Rate. This is the most important layer for all biological activity.

●  in the lower part of the troposphere, the lapse rate along the vertical is very steep.

●  Innumerable vertical currents moving throughout the year cause the troposphere to remain unstable.

●  This instability leads to upward movement, condensation, formation of clouds and precipitation.

●  The transition separating the troposphere from the stratosphere is termed tropopause.

●  The stratosphere is found above the tropopause and extends up to a height of 50 km.

●  One important feature of the stratosphere is that it contains the ozone layer.

●  The lower portion of the stratosphere has a maximum concentration of ozone is called Ozonosphere. It is found in between the height of 15 km to 35 km above sea level.

●  This layer absorbs ultraviolet radiation and shields life on the earth from intense, harmful forms of energy. Therefore, temperature rises in this layer.

●  This layer is free from atmospheric disturbance, making conditions most ideal for flying aero planes.

●  This layer is also almost free from clouds and associated weather phenomena.

●  The transition separating the stratosphere from the mesosphere is termed stratopause.

●  This is the third layer of the atmosphere.

●  The mesosphere lies above the stratosphere, which extends up to a height of 80 km.

●  Meteorites burn up in this layer on entering from space.

●  In this layer, the temperature starts decreasing with the increase in altitude and reaches up to minus 100°C at the height of 80 km.

●  The upper limit of the mesosphere is known as mesopause.

●  In the thermosphere, the temperature rises very rapidly with increasing height.

●  The ionosphere is a part of this layer.

●  The ionosphere is located between 80 and 400 km above the mesopause.

●  Since the layer contains electrically charged particles called ions, it is known as the ionosphere.

●  Radio waves transmitted from the earth are reflected in the earth by this layer.

(a)   D Layer (between the height of 60 km to 90 km): It reflects the signals of low-frequency radio waves but absorbs the signals of medium and high frequency. This layer disappears with the sunset.

(b)   E Layer (between the height of 99 km to 130 km): It is also known as the Kennelly-Heaviside layer. This layer reflects the medium and high-frequency radio waves back to Earth.

(c)   F layer (at the height of 250 km): It reflects back high-frequency radiowaves. The phenomenon of Aurora generated in this layer is called Aurora Borealis in the North Pole and Aurora Australis in the South Pole.

●  The uppermost layer of the atmosphere above the thermosphere is known as the exosphere.

●  The charged particles are concentrated in two bands at about 3,000km and 16000 km above the surface.

●  These particles are the result of traping of the cosmic particle by Earth’s Magnetic field and is called the Van Allen radiation belt.

●  The particles seen in the layer are extremely rarefied and it gradually merges with outer space.